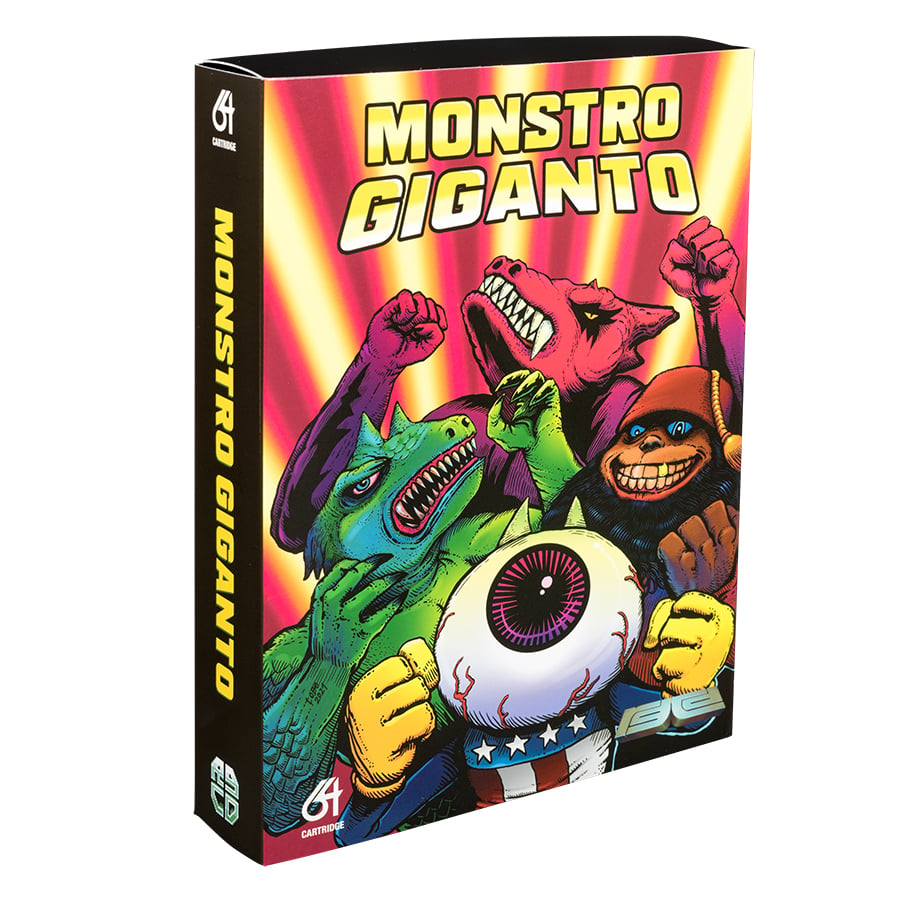 This is a PRE-ORDER! This 3rd batch of cartridges will ship in mid May 2021!

Brought into existence through human misadventure, four gigantic beasts have emerged to duke it out toe-to-toe in an epic brawl across the continents!

Take control of the monster of your choice and battle against the AI or another player in this furiously-paced PESTCII party-puncher! Who will be hailed as the King of Monstros in the Monstro Giganto hall of fame?!

Developed by Antonio Savona, Lobo and Aldo Chiummo of the Pirates of Zanzibar, Monstro Giganto is a one or two player brawler of epic sized proportions! Featuring relentless arcade style gameplay, huge and highly animated player characters, 101% PETSCII graphics, over 250 words of digitised speech (your Commodore 64 has never been this chatty!), a killer sound track, on-cartridge high score saving, unlockables and full PAL/NTSC compatibility, Monstro Giganto is a game worth fighting over!

Monstro Giganto is an RGCD Production. The cartridge version of the game is presented in a custom RGCD banded three-part cardboard box with a glossy outer sleeve. The cover art was illustrated by Lobo and the game comes complete with a professionally printed 20-page A6 manual, vinyl RGCD and Monstro Giganto stickers, a 4-piece Monstro Giganto badge set, post-cards and a 170gsm matt-coated A3 poster. The GMOD2 PCB is housed in RGCD branded black cartridge shell, with a 3D domed label.

Monstro Giganto was programmed to run exclusively from cartridge, as it continuously streams data from the ROM during play. For this reason, a D64/Disk version is not available. Instead, a downloadable .CRT is available in both GMOD2 and EasyFlash format with every purchase to use via emulation or on real hardware devices such as the Ultimate 1541-II. Please check that your hardware is compatible with these formats! (Note that a stand-alone digital download of the game will be available to buy soon).

Finally, and this is VERY IMPORTANT. Monstro Giganto will sound DREADFUL if played on an Ultimate64 without a real SID Chip. I'm sure the Ultimate's emulation will be improved in time, but for now, it just doesn't cut it. It does however sound great on both the Mega65 and even TheC64!

by Antonio Savona , Pirates of Zanzibar , and RGCD ,