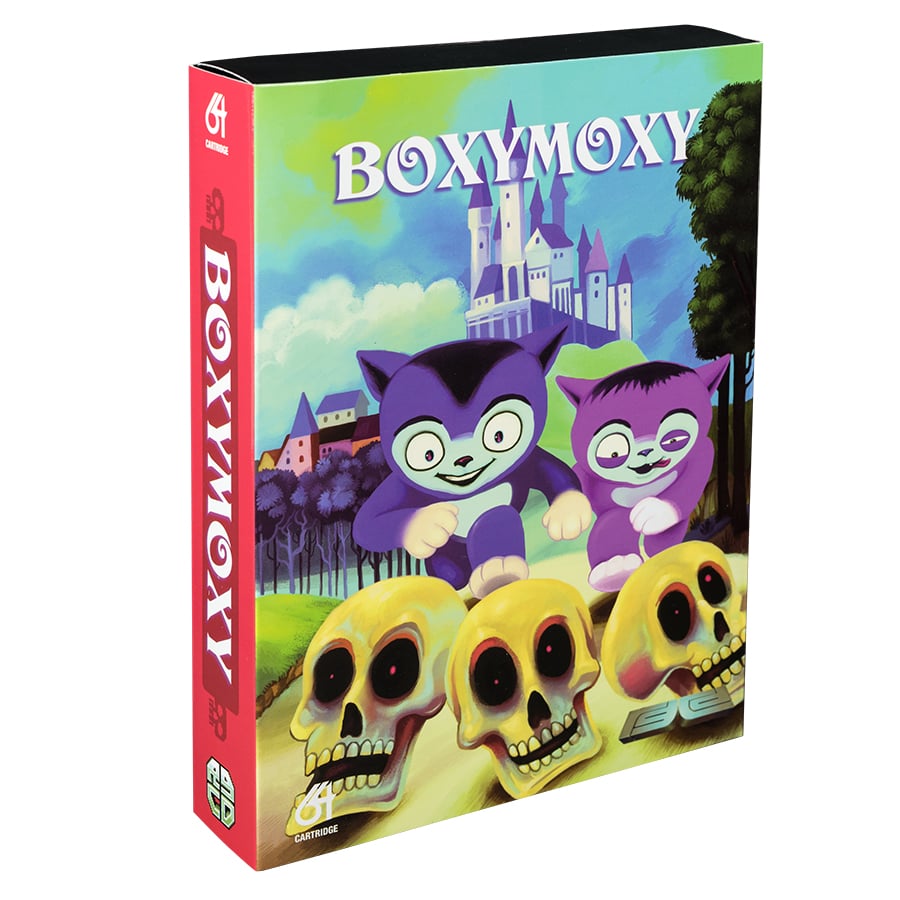 The stupid old Wizard had cast a wrong spell, creating an invasion of chattering skulls and now no one can sleep! Two cats, Boxy and Moxy, are set to clean up this mess. Using their combined powers, you will traverse 60 levels over three areas in order to destroy all skulls and restore the beauty sleep to the people of the old Kingdom!

Developed by Antonio Savona (of P0 Snake and Planet Golf fame), designed by Lobo and with a soundtrack by Aldo Chiummo, Boxymoxy is a fiendish (or felineish?) puzzle game for the Commodore 64 unlike anything else you have ever played. Inspired by Lobo's cat Gelsomina, with a little Sokoban and a tiny dash of Angry Birds thrown in for flavour, Boxymoxy is a game about moving cats and smashing skulls using the power of logic.

Featuring 60 challenging puzzles, unique gameplay, a player performance-graded progress system with on-cartridge saving, 15 digitally-sampled and distinct meows from 12 cats and full PAL/NTSC compatibility, Boxymoxy is guaranteed to keep you entertained for hours in the purr-suit of that perfect or even under-par score! Simply put, it's the cat's whiskers!

Boxymoxy is an RGCD Production. The cartridge version of the game is presented in a custom RGCD banded three-part cardboard box with a glossy outer sleeve. The cover art was illustrated by Lobo and the game comes complete with a professionally printed 16-page A6 manual, vinyl RGCD and Boxymoxy stickers, Boxymoxy and RGCD badges, post-cards and a 170gsm matt-coated A3 poster. The GMOD2 PCB is housed in RGCD branded black cartridge shell, with a 3D domed label.

Boxymoxy was programmed to run exclusively from cartridge, as it continuously streams data from the ROM during play. For this reason, a D64/Disk version is not available. Instead, a downloadable .CRT is available in both GMOD2 and EasyFlash format to use via emulation or on real hardware devices such as the Ultimate 1541-II. Please check that your hardware is compatible with these formats!

Note that purchases of the cartridge also include this downloadable version of the game for free.

by Antonio Savona , Pirates of Zanzibar , and RGCD ,